The “Six Whales” of Taiji 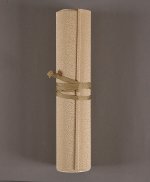 A few dozen painted scrolls depicting whales and whaling in the region of Kishu are owned by the Taiji Whale Museum and the New Bedford Whaling Museum in the U.S. Many of them include illustrations of the six species of whales mentioned by Taiji Kakuemon, head of the Taiji whaling fleet, in a letter written in December 1791 describing the local hunts. They also include many additional whale and fish species. Perhaps the old Taiji whalers used scrolls such as these to describe their methods and the sea creatures they persued. 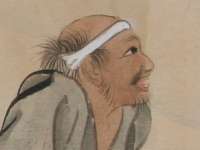 This scroll painting starts with a bird's-eye-view of the village of Taiji. Taiji's hash mark (井) crest on the bow of the boat proves that it belongs to the Taiji whaling fleet. But the style and the design of the boat look very different from other Taiji whaling boats depicted in other scroll paintings. Twenty-eight animals, including various kinds of cetaceans, a sun fish, a manta ray, a hammer-head shark, a whale shark, a sea otter, and even a dolphin with fur follow further along in the scroll.

Illustrations of Taiji Whaling and Whales 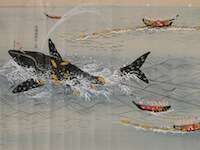 Minute brushwork depicting a humpback whale caught in nets being harpooned by whalers, followed by scenes of warehouses located on Mukaijima Island, across the bay from the flensing beach and the village shrine. Nets, harpoons, casks, boats and other gear were crafted, none of which were depicted in other Taiji scrolls. The scroll still holds vivid colors, probably as a result of being copied relatively recently.

Illustrations of the Large Fish in Kishu Kumano 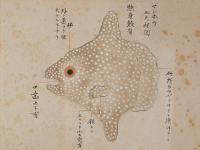 Calves or fetuses of five whale species are depicted. Copied by Kisanjin (Shigeo Nakatani) from a scroll owned by an anonymous owner.

Illustration of Whales in Taiji 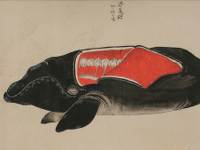 Scroll paintings are usually unfolded from the right to the left. But this scroll unfolds uncharacteristically, from the left to the right. Drawings of dissected right whales also appear.

Illustrations of Whales in Koza 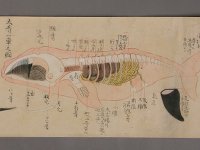 Illustration of Whaling in Taiji 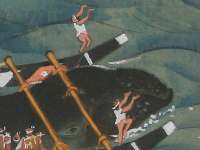 Shohachi Wada, an art teacher, superintendent of the Taiji Board of Education, and a descendant of Taiji's whaling founder, copied this after a scroll owned by the Wada head family. Mr. Jun Mukai commissioned it for the repose of the soul of his brother, who died in an Antarctic whaling expedition. The painting was donated to Taiji Junior High School, and later to the Taiji Whale Museum.

Illustrations of Whales in Taiji 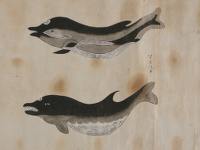 The whale depicted in the far right of the scroll, indicated as "koto kujira," was likely originally intended to portray a "gondo kujira" (pilot whale). The animal's two dorsal fins must have been mistakenly painted when the artist copied the image after another unknown scroll. The scroll displays comments about the "koto kujira" such as "low taste" and "six casks of oil."

Illustrations of Whales and Whaling in Koza 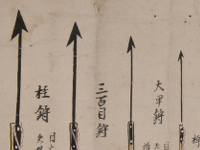 Anatomical illustrations of various right whale body parts, tools, chasing boats, a net boat, a net, and a whaling scene were painted, following eleven species of whales. The Buddhist swastika (卍) crests on the bows of the boats clearly show that they belong to the Koza Whaling Fleet.

Illustration of Whaling in Kii-Koza 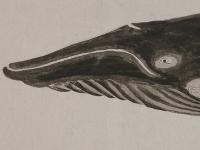 Mr. Shichiro Nakane, deputy mayor of the Town of Koza and an expert in local history, collected and copied numerous historical documents on old whaling. Most of them were transferred to Keizo Shibusawa's Saigyodo Bunko, and then to the library of the National Research Institute of Fisheries Science. This scroll was reproduced by Nakane in 1936.

Illustrations of Whale Boats in Taiji 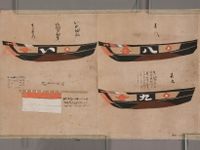 Taiji's whaling fleet consisted of Seko-bune (chasing boats), Ami-bune (net boats), Mosso-bune (whale-carrying boats), and others. In the early 18th century, the number of chasing boats exceeded twenty, and it later decreased to fourteen by the end of the century. The boats were lacquered in 1662 for the purposes of reducing water resistance and increasing speed. Each boat was easily identified with its distinctive colorful design. The first chasing boat in the fleet with the first harpooner and fourteen oarsmen aboard had an elaborate design depicting a phoenix with paulownia flowers on both sides of the boat. The second boat had a chrysanthemum design, and the third boat's design showed a combination of a pine tree, bamboo, and a plum tree. These designs all indicated good-luck, hope of a good catch, and safety on the sea. 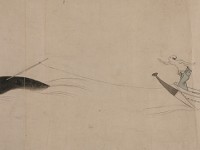 The whale boats here have no crests and paintings. Composition obviously differs from those of any other Taiji scrolls. "Kino Mifuyu, 1818" is written at the end of the caption. Kino Mifuyu was the chief priest of Hinokuma Kunikakasu Jingu Shrine in Wakayama. 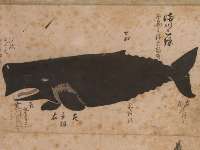 Detailed descriptions of whaling tools are followed by drawings of 11 species of whales.

Movie of Traditional Whaling in Taiji