Today, more than ten species of baleen whales are recognized worldwide. They have hundreds of baleen plates arranged across their upper jaws, and different species are different colors and shapes. While the whales are alive, their baleen is very flexible, elastic, and has a peculiar triangular shape. It consists mostly of keratin just like our fingernails and hair. 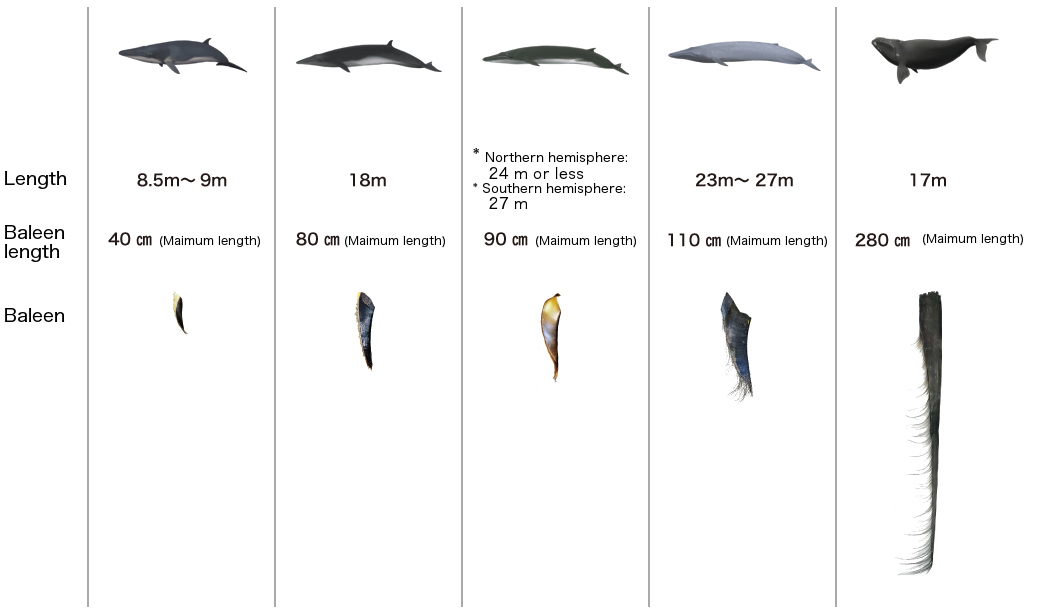 The Many Uses of Baleen

Steamed baleen is soft and can be molded into various shapes. As a result of its peculiar elasticity and stain-resistant characteristics along with its beauty similar to that of tortoiseshell, baleen products are still made in Hokkaido, Miyagi, Osaka, Nagasaki, etc. However, manufacturing baleen products requires highly experienced artisans and time, which makes it difficult to continue its production.

Made of fin whale baleen

Baleen is cut, curved, and then polished to form the shape of a whale's tail.

They are cut, steamed, and then pressed into shape.

These are serving plates for dessert or snacks. They are cut, steamed, and then pressed into shape.

Elastic baleen is used at the tip of the rod.

This baleen was finely cut and carved into an ear-pick. The hand-drawn face of a whale is interesting.

Cut along the baleen fibers and curved at the end with slits, only great skill can produce the curve of this back-scratcher.

Sei whale baleen, with its strong yet flexible structure, made popular shoehorns.

The sails and the bodies of the whales and the dolphins are made of baleen. The technique behind cutting and carving baleen is masterfully done.

Awaji “deko-joruri,” or traditional puppet theater, has a 500 year history. The “tayu” (narrator), the “shamisen” (a traditional, Japanese 3-stringed instrument), and the puppet depict morality and emotions in Japanese culture. Each puppet has three puppet masters, and by moving the eyes, the eyebrows, and even the horns on their foreheads, the puppet's faces can express a variety of expressions. Baleen is used for these detailed facial movements. Two sets of baleen are shaved 1 mm thin and 1 cm wide and are used as springs and tied to the puppet’s eyes and eyebrows with silk threads, which are also used in Shamisen. Thus, pulling the silk threads moves the puppet's eyes and eyebrows. Traditionally, the baleen of the North Pacific right whale has been favored for its smooth movement; however, other baleen is also used now due to their rarity. Puppets in particular use fin whale baleen.
* Tayu: The puppet theater narrator who narrates the story and the character's emotions.

The “usho,” or the cormorant fisherman, uses several cormorants at the same time. “Tsumoso” is a 30 cm long baleen stick which is tied between “kubiyui” (hemp) and “tazuna” (rope). The elasticity of the North Pacific right whale's baleen was traditionally favored along the Nagara River in Gifu; however, plastic “tsumoso” has taken its place since baleen is rare and expensive today. The “tsumoso” in this picture (indicated by the arrow above) is made from the baleen of a North Pacific right whale.

When igniting a fuse, the flame travels through a small hole called a touch hole and then ignites the gun powder inside the barrel. In matchlock guns, the momentum of the explosion fires the bullet. However, after several shots, the narrow 1.0 to 1.5 mm touch hole becomes blocked with soot, so a long tool called a “seseri” is used to clean it. Since there is a curve at the end of the touch hole, this strong, flexible material was used. During the Sengoku (1567-1603) and the Edo (1603-1868) periods, flexible metal was not available, so the baleen of the North Pacific right whale and the fin whale was prized for its flexibility and strength.

What kind of teeth do whales have?

There are currently more than 70 species of toothed whales in the world. Depending on what they eat, the number and size of their teeth differ among species. While most mammals have teeth that vary in shape, whale teeth are all the same. The shape of their teeth tells us that they swallow their food without chewing. 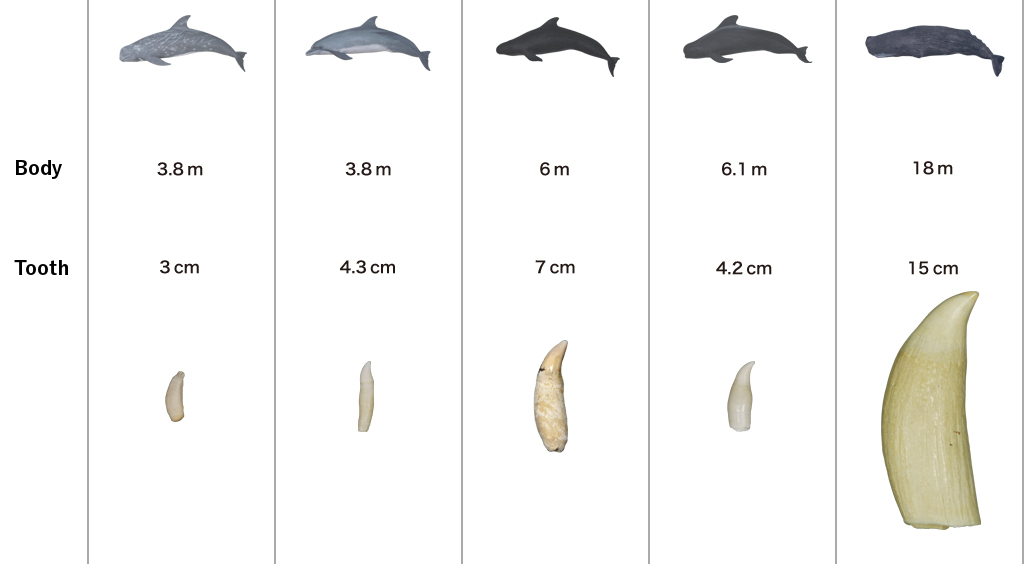 The Uses of Whale Teeth

The most popular teeth which are used in whale products are those of sperm whales. Since they have holes in their teeth depending on their age and size, it makes it difficult to choose the right tooth for the right product. While the whale tooth industry still survives in Miyagi and Nagasaki, the scarcity and the cost of whale teeth makes it difficult to continue production. Today, modern materials like plastic are being used in place of whale teeth.

This pipe was made from a sperm whale tooth.

Hand-made pipes were popular among whalers in Taiji.

This inkan, or stamp, was made from a sperm whale tooth.

With their strength, durability, and beautiful ivory-like brilliance, inkans made from whale teeth are viewed as luxury items.

Among whalers, “Scrimshaw” is the tradition of carving the bones or teeth of sperm whales or other animals during their long voyages. Whalers carved pictures into the bone, brushed the surface with whale soot oil, and then polished them. They were then used as souvenirs for their family waiting back at home.

This is a unique vase made from a huge sperm whale tooth.

These are penguin figurines made from sperm whale teeth of different sizes.

A variety of figurines such as cranes, penguins, and flowers remain in Taiji.

The image of a rising dragon is carved on the surface of this sperm whale tooth.

Experience and skill was required to carve this intricate design onto the hard surface of the sperm whale tooth.

There are brooches of flowers and whales which are made from sperm whale tooth.

“Sukashi” is the technique behind carving the tooth thin enough let light transfer through it, which requires a large amount of skill.

Six different whales are carved on this sperm whale tooth.